Formation for a Fallen Comrade 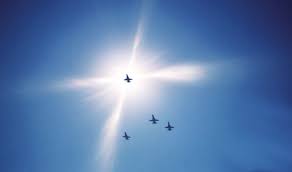 When we were pretty little – my twin sister, my older sister, and myself – our stepdad would create elaborate Easter Egg Hunts with cryptic clues that sent us all over the yard. Looking back, I can only imagine the strange delight he must have had watching us sort out the clues and traipse around the five acres that surrounded our house, buying our parents hours of peace and quiet.

Some years the hunt would end with an actual rabbit at the end of the trail … one year two rabbits our mother named after Watership Down, Fiver and Henna – bunnies that lived outdoors in a protected hutch. Another year it was the cutest lop-eared bunny who we fell in love with, brought inside, and couldn’t quite figure out how to deal with the fact that each time she hopped she let out inoffensive but unstoppable pellets.

Each year these rabbits mysteriously ran away while we were at summer camp.

Other years, I remember eating chocolate all day long, delighting in the treasures we got to greedily gobble up, then off to our grandparents’ house we would go for Easter dinner, the delightful scent of bourbon soaked ham and lamb as we walked in the back door. This holiday was never particularly religious for us as a family. It was, as most of our holidays were, more about tradition, being together, cocktails and dinner.

As a teenager I started a tradition of my own volition. To this day I have no idea where the idea came from. I decided we should have a life sized easter egg tree and began exploring how to do this. One lucky redbud at the center of our circle driveway provided the perfect spot. I carefully filled pastel balloons with a splash of water then filled them up the rest of the way with air and hung them artfully around the tree. The water weighted them down enough that they did, in fact, have the semblance of easter eggs, especially from a distance.

When I moved away from home and began my own life as a young adult, I still craved coming back for certain holidays and traditions.

With friends from Madison in tow, we would drive down to Barrington, up the gravel driveway, and were typically greeted by my mother and champagne on the back porch. With our stepdad’s cryptic clues in hand, we would find ourselves flitting around the yard – now with pastel heels aerating the yard, stylish hats, and flutes of bubbly in hand. I felt I had been waiting all my life for this, one foot on each side … to feel like a kid and be treated like an adult. This went on for a handful of years though the memories feel like it lasted much longer.

After my mother died, I remember having one last Easter at the house – less joy, more champagne.

I wanted to carry on with tradition that year, but I was also a muddle of exhaustion, grief, and sorrow. The feeling at that time was that of an airplane constantly taking off and having to land again mid-flight. A surge of energy would spur me into action, but more often than not that action would have to be aborted as some kind of primordial fatigue set in – the inescapable weight of grief and sorrow.

I went to the store, bought the pastel balloons (gung ho and energized), and when I returned to the house and felt the reality that life was different and my mother really wasn’t there to greet me on the backporch with champagne and laughter, lost all conviction, enthusiasm dashed.

There it was, the grief I kept pushing back against, hoping it wasn’t real.

For whatever reason there was one white balloon I decided to string up that year. Like some force pulling me and with no particular reason, I tied the singular balloon to a sapling just outside our sunroom windows and stood inside drifting off and sort of staring at it – the one nod to our old tradition, all I could stomach in my grief.

Standing in the sunroom, champagne in hand, a strange sense around my heart as I stared at the solo white balloon, my Uncle Terry came up to me and started to tell me about a certain formation the airforce flies in honor of fallen comrades – a clear vee with one spot vacant, a powerful tribute to the dead and missing.

I didn’t have the strength that year to create the whole formation, but there it was, our accidental tribute.

I remember telling my step-dad later on (before I realized we would have to sell the house) that the Easter Tree was important, and we would have to keep it up in the years to come. We could never know how many people drove down our country road and looked forward to it each year. He laughed my eccentric notion off, and life went on – he living in an empty house, my sisters and I back to our lives in other places.

A month later I received a forwarded note in the mail from our longtime neighbors across the street. The Billmans had written to our stepdad to check in and see if everything was alright, and, “Oh, how they had missed seeing the Easter Tree” that year.

It seems we don’t often know which traditions of our own ripple out and out, how much they mean to others as our lives cross and drift apart … how we crave collectively from generation to generation, some continuity with the past.

We have since passed the tradition of the Easter Tree down to my twin sister’s children. Some years they’re more interested than others, and it may never mean as much as it did to some of us back then.

Some years I silently hang one white balloon around my heart and carry it with me.